What is Firefight 2nd Edition?

Set in and around the Galactic Co-Prosperity Sphere, Firefight is an immersive and exciting tabletop game of futuristic battles fought on alien worlds and in the warzones of the future.

Need guidance on where to start? Use these helpful quick links below:

Read our getting started guide

Over the centuries, humanity has spread inexorably into the far reaches of space. Since the creation of the Galactic Co-Prosperity Sphere (GCPS), humanity’s touch has never been felt so keenly and by so many. The sphere now encompasses myriad planets and hundreds, if not thousands, of different species. Some join the Sphere willingly, while others resent the GCPS and bide their time, waiting for humanity to fall or prepare to take their own revenge. Memories of Old Earth are but a shadow, lost in a haze of light speed and technological  advancement. Now there are only two things that drive humanity: progress and profit. 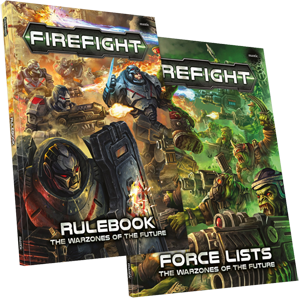 The official Firefight List Builder lets you create, analyse and share your Strike Force lists to official tournaments and other players. It's free to get started!